1. Hearing one of my online friends describe a petty cash IOU as a “tiny document of trust”.  What beautiful (and appropriate!) imagery.

2. While out with the puppies, walking past an older man who was putting an upright string bass into his vehicle.  When I saw him I smiled, then called out, “Do you play?”  He replied, “Yes,” then asked, “Do you?”  I nodded my head, and approached his yard.  We had a brief-yet-lovely exchange about his plans (he’s performing at the State Fair for a few hours, mostly bluegrass), his animals (he has a poodle, too – but it’s apricot instead of black, and it yaps a lot), and his history in the neighborhood (he’s lived in his home for 30 years!).  Now that we have officially “met”, I will keep my eyes open for him.  It felt great to make a local connection.

3. Opening a beverage this afternoon, I saw this on the underside of the cap: 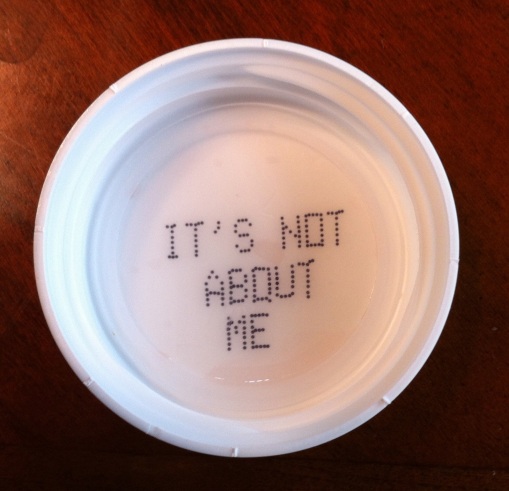 Want to join me? Feel free to share any of your daily delights below. (Other comments also accepted.) :) Cancel reply

This work is licensed under a Creative Commons Attribution-Noncommercial-No Derivative Works 3.0 Unported License.